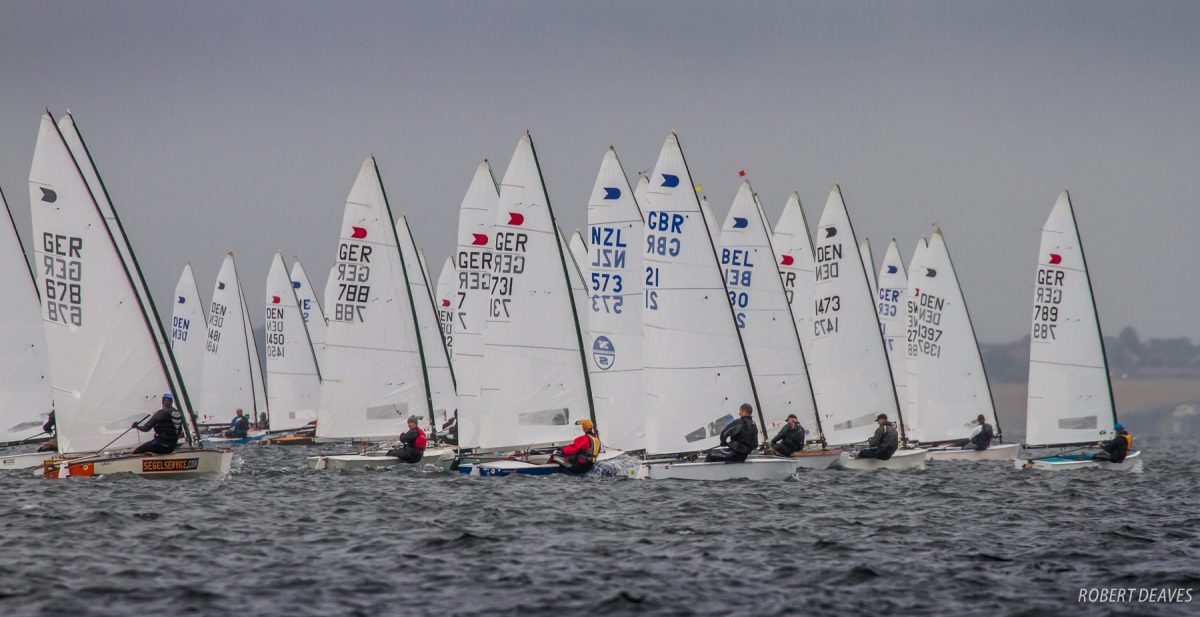 You really need a sense of humour to sail in the rain and with the Danish summer producing its best in Faaborg so far at the 2017 OK Dinghy European Championships, all 130 sailors are luckily in very good humour.

The fleet launched for Tuesday’s practice race in plenty of rain to keep everyone happy but enough wind to keep everyone moving. The northerly wind provided an added complication coming off the shore with plenty of shifts and some sailors having trouble finding the first mark against the shore.

It had rained most of the morning, as well as most of the previous day, so there was plenty of water to sail in, but even so some sailors managed to find the bottom on the right of the course as the depth shallowed. Around 80 sailors braved the liquid sunshine and set out from Faaborg Sejlklub for a damp afternoon on the fjord, but the rain did slow down slightly on occasions as the fleet fought for the honour of practice race glory.

Ask Askholm led round the fist mark from Luke Gower and Thomas Hansson-Mild. Hansson-Mild took the lead offwind, but Gower struck out left on the second upwind to steal the lead and led into the finish. Hansson-Mild and Charlie Cumbley were second and third but dipped the finish to leave Bo Reker Andersen and Andre Budzien to complete the top three.

Later, the Opening Ceremony was held at the Havnebadet with an impressive location overlooking the fjord, with speeches from the Race Committee Chairman Jakob Frost, the Mayor of Faaborg, Christian Thygesen, and Danish Sejlunion’s chairman Line Markert. It started raining again soon after the speeches concluded.

The OK Dinghy Europeans is the biggest event in Faaborg Sailing Club’s history. Racing begins on Wednesday with two races scheduled as part of the 10 race series, which concludes on Saturday.