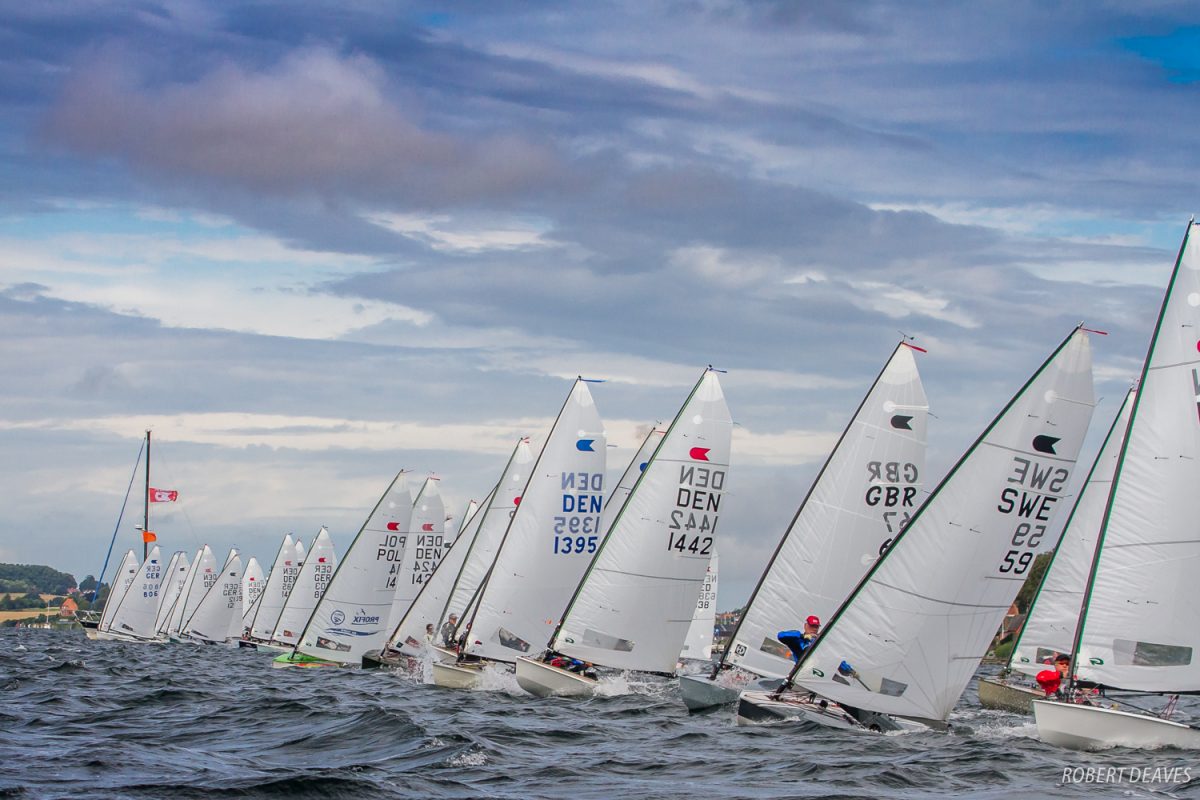 There is almost nothing to separate Lars Johan Brodtkorb and Charlie Cumbley at the 2017 OK Dinghy European Championship in Faaborg, Denmark. Another win each leaves them just two points apart and 11 points clear of third placed Bo Petersen, the defending champion.

Only two races out of the scheduled three were sailed on the third day in Faaborg. Brodtkorb and Cumbley took a win each in their group, while in the other group, Johan Bjorling and Jonas Borjesson won one apiece.

With the wind at 10-14 knots and promising more, the first group for Race 6 contained the top three overall and could provide a preview of Saturday’s gold fleet races. Cumbley led at the top but Petersen edged ahead at the gybe mark and led most of the way until Brodtkorb took the lead on the final upwind to win, with Cumbley slipping back to third in a close finish. Luke Gower was the early leader in the second group, but Jan Kurfeld took the lead round the second top mark but then lost it to Bjorling in another close finish.

The wind dropped with an approaching cloud but when that passed to the east the wind came back in at 10-14 knots for Race 7. The first group looked like being a runaway win for Borjesson, and he extended until the final upwind, when Kurfeld ground him down and the two crossed the line overlapped, while a third for Thomas Hansson-Mild moved him up to fourth overall. Brodtkorb had rounded the top mark about 20th, but had worked his way through the fleet to finally cross in fourth. The second group was was a fight between Mats Caap, Oliver Gronholz and Cumbley. Cumbley trailed them down the reaches but was back in charge on the second upwind to record his third win of the week.

An attempt was made at getting the third race away but a huge shift on the first beat caused the race to be abandoned with Jan-Dietmar Dellas in the lead, and after a further attempt was stopped before the start, further racing was abandoned for the day as the weather won. 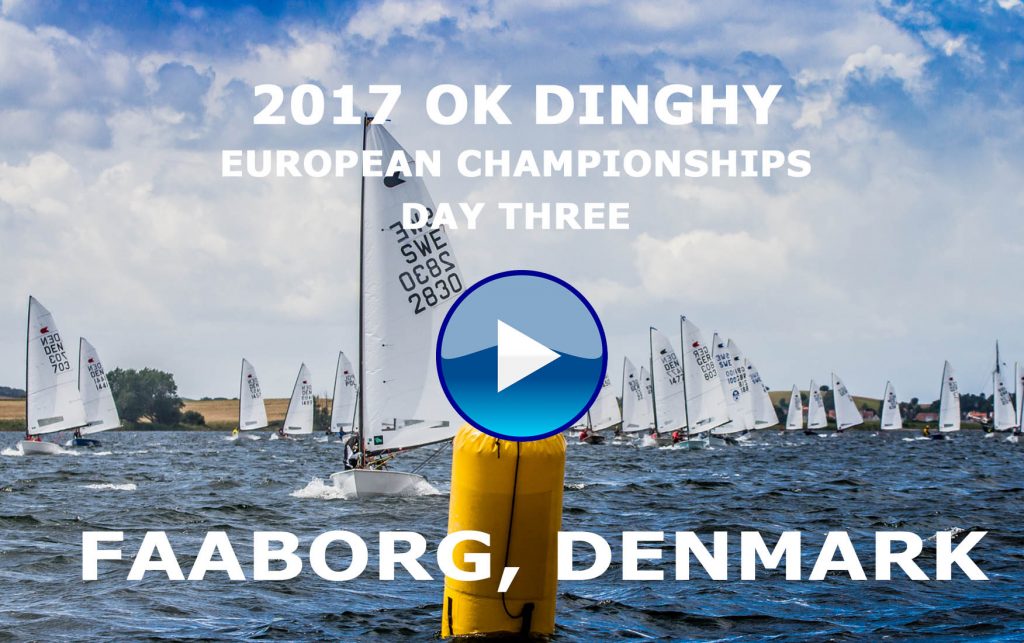 Highlights from Day 3 at the 2017 OK Dinghy Europeans

Brodtkorb is an unknown in the OK Dinghy class and it showing a remarkable skill in the boat at his first event after just a few days training before this event. He is normally a Europe and Finn sailor, having won two Europe Worlds in recent years.

“I came here because Jesper Strandberg lent me a boat and Jorgen Holm lent me a mast and sail. It was very convenient, because I just sailed the Europe Worlds in Spain and this was on the way home so I just came right here and trained for a few days. I think it’s a good boat and is enjoyable, but in the light winds is a bit hard on the downwind.”

“I think I have been sailing really well, and some of the sailors here are really good, but in the really shifty conditions I think I made a lot of good decisions, and you will be ahead no matter who you are sailing against. Today I made one bad decision in the second race and that cost me a lot of boats. But a lot of the other boats are doing a lot of good stuff, but different, but on the downwind in light winds I seem to have some issues, but that may just be time in the boat. I can’t learn everything in a few days.”

On today’s races, “In the first race I was near the top, but still I was third at some point. I think the second one was the hard race, and I was fighting all the round to finish fourth. I don’t think I could have passed any more boats.”

He says he will maybe sail the OK Dinghy in the future given the chance, but his immediate focus is on his studies and the Finn U23 and Gold Cup next month.

On his first OK Dinghy experience, “I am really enjoying it. When you compete with 130 sailors it’s great training and a great experience. The sailors are also very nice. I have met many people who shared their ideas and help me as well, and finding out how to sail with a new boat.”

The championship is a major triumph for the Danish OK Dinghy association, which has grown at a faster rate than any other national class worldwide in the last few years. Jesper Strandberg has been a large part of that, building some beautiful boats and explained that Faaborg was an easy choice as the venue for the Europeans.

“Faaborg was from the beginning really keen on doing this and they set a new bar for making this kind of event, so they were in the lead over all the other clubs who were interested.”

“We expected about 150 boats, but it’s been a really nice turn out, but it’s nice to see all of our sailing friends from all over Europe.”

On sailing in Faaborg, “It’s a small area. We always knew it was going to be tricky out there, and it has been shifty, but we have seven races in now out of eight planned, so I think that’s really good.”

“There are a lot of Danish boats here, about 50. The fleet is really growing in Denmark and so many people want to take a week’s vacation to do some OK sailing.”

Racing concludes on Saturday with the fleet now split in gold and silver fleets based on their results so far. The forecast is for strong winds, and even though the top two have a nice gap, in the OK fleet take nothing for granted.