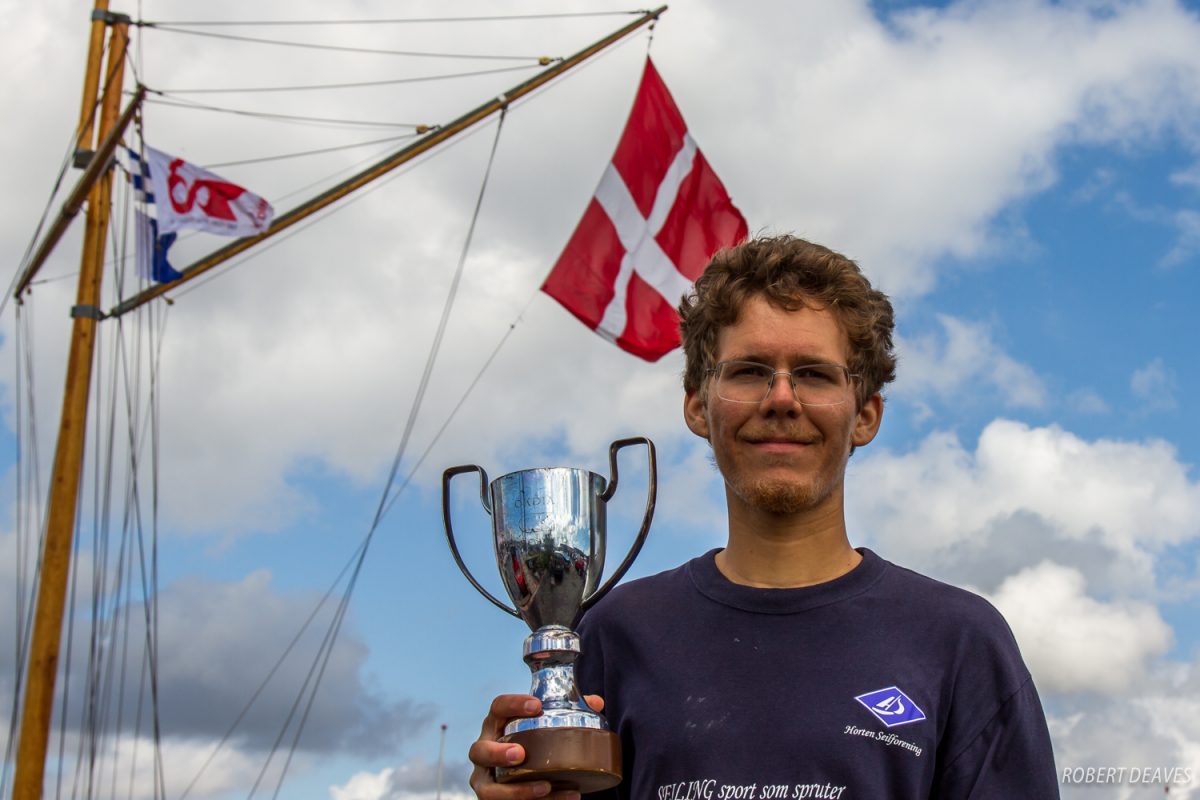 Lars Johan Brodtkorb made history today by becoming the first Norwegian ever to win a major OK Dinghy Championship, after the final day of the 2017 OK Dinghy European Championship in Faaborg, Denmark was cancelled because of strong winds. Charlie Cumbley from Britain takes the silver and the defending champion, Bo Petersen, takes the bronze.

The forecast strong winds arriving during the night, along with even more rain. Many sailors began packing on waking, but the stalwarts and hardy sailors braved the elements in the dinghy park and hoped to sail. However by 12.00 the conditions had not improved and the forecast was not promising, so the race officer abandoned all further racing.

Last year when Petersen sailed against Cumbley, the Brit broke his rudder in the deciding race. Petersen said, “I am more than happy with the bronze. I had a half chance to get up to gold or silver but I could also lose the bronze very quickly. I got better and better during the event but was still only three points ahead of Thomas [Hansson-Mild].”

“I am proud of winning the bronze in my old home town and it shows that the small towns can do something great if they really work hard for it. This week they got people get out on the water to look at the races and had the big screen in the big tent overlooking the harbour. I am very proud to be part of that.”

Cumbley adds another silver medal to his bronze and silver at the World Championship, but the gold continues to elude him.

“It’s always a shame when we don’t get the last day’s sailing in especially as we were into the first installment of the gold fleet racing. But that’s the way the cookie crumbles.”

“Massive congratulations to Lars Johan. He sailed really well and slick and fast and I had to sail as well as I could just to keep in the mix.”

“It’s a shame we didn’t have a last race tangle, but I think it’s been a really excellently organized regatta, the host cub has done a fantastic job making everyone welcome, and despite the weather, which was less than summer like, it’s been really good and I have really enjoyed myself and looking forward to next year.”

Brodtkorb said, “It feels really good to win. If not for the standings I would have hoped we could sail, but if I was training I would have probably gone out, but it was probably a little bit much for racing. I went to look and it was really windy.”

On his expectations, “I didn’t know what to expect. I knew I could be competitive but that was just because I know Jorgen’s sails and I think that’s important. The days I trained I pretty much only used it for finding mast positions and such.”

“It was kind of preparation for the Finn because I am always working on that and trying to find the best set up. The mast position is very similar to the Finn, and it doesn’t much matter about the boat, as the mast position is so important. I was not quite satisfied before the event, as I couldn’t quite figure it out in time, but changing things around makes it more fun, as it all makes a difference and I really like changing and trying.”

On the OK Dinghy, “I knew how the boat looked so I came because I knew it would be good training, and when the competition started I was always going to try my best but I didn’t really know what to expect.”

While the weather here has been the dominant factor, next year the event moves to the Mediterranean at Bandol on the Côte d’Azur, where the hope is for less Danish weather, but the same great hospitality and competitive racing.