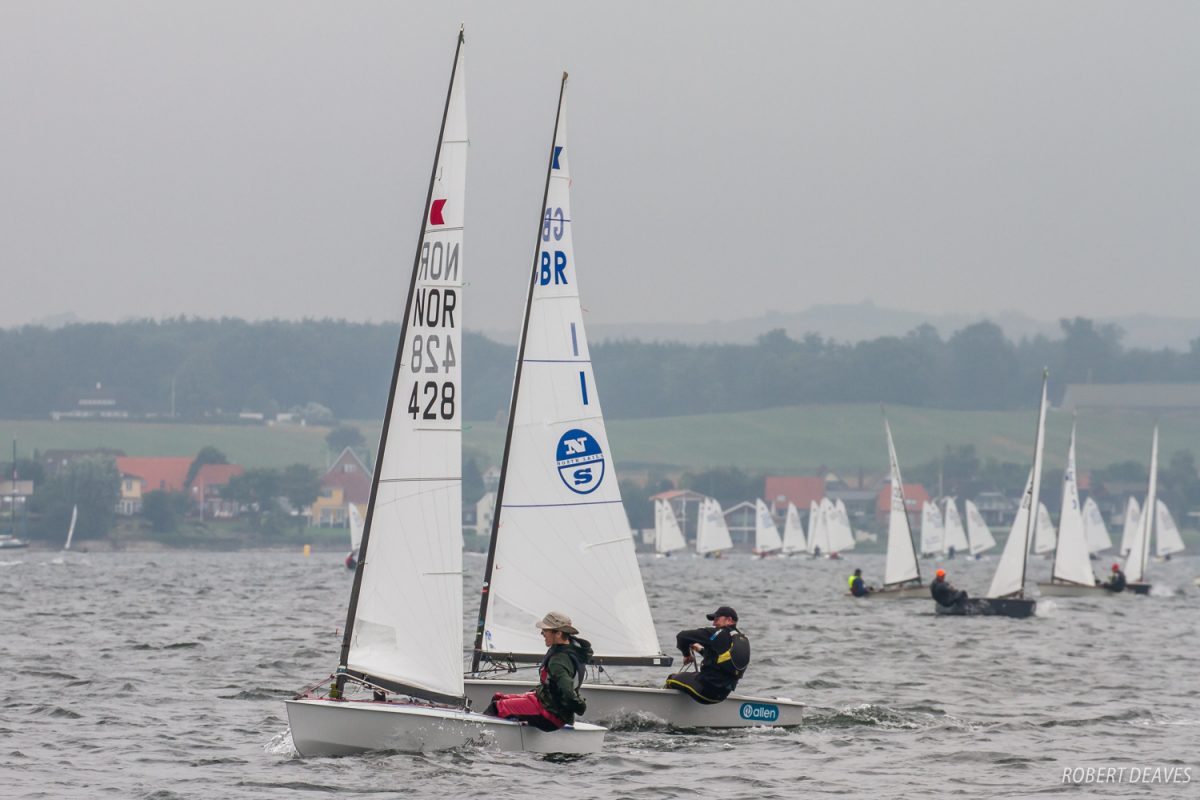 After three more exciting races there is only one point separating Lars Johan Brodtkorb and Charlie Cumbley at the 2017 OK Dinghy European Championship in Faaborg, Denmark, after sharing the wins today in their group. The defending champion, Denmark’s Bo Petersen, is nine points behind. The other race wins went to Jan Kurfeld from Germany, Jens Lauge from Denmark and New Zealand’s Luke Gower.

With the Danish summer now seemingly reduced to just one day, Wednesday, the fleet once again launched under falling rain and low clouds and endured nearly seven hours on the water in the wintry Danish conditions. The rain cleared after the first race of the day as the wind shifted from south to west, but it remained a generally bleak and grey day as three races tested the endurance and patience of the 130 OK Dinghy sailors.

Highlights from Day 2 at the 2017 OK Dinghy Europeans in Faaborg, Denmark. 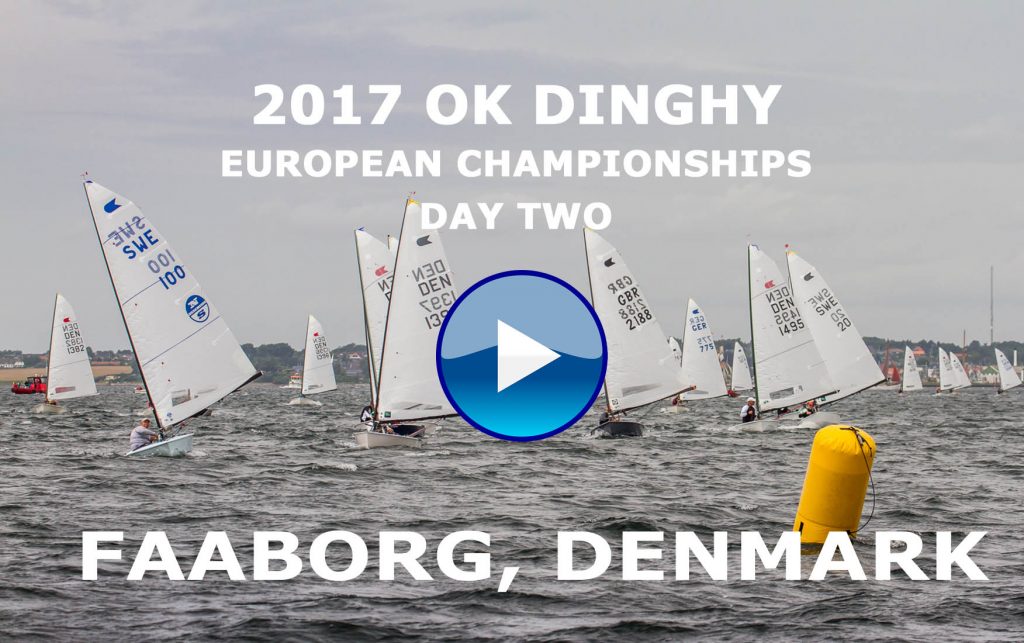 Both Brodtkorb and Cumbley are in the same group, so are having a daily battle on the water. Thursday’s score was two wins to Cumbley and one to Brodtkorb, Cumbley having to chase down the Norwegian in the opening race to secure the win.

Defending champion, Bo Petersen, is feeling a lot of local pressure to retain his title here, but a third in the opening race and a second in the last race has moved him up to third overall after several of the other contenders struggled today and picked up high scores.

“It’s good fun, tricky racing. The sun was better yesterday, today a little rain, as we are used to, but it’s nice to be here.”

“The fleet is tough and you have to struggle a lot to be up there. Yesterday was tricky racing, but today was more normal. We are halfway now, so let’s see what happens.”

On the home town pressure “Everybody wants to talk to me, I can’t go in the zone. I can’t relax enough to make decisions and have to tell stories, but so it is.”

About the event, “I don’t think there had ever been a fleet this big here. The way Faaborg Seljklub has done this, they are really doing a great job to show everybody a good time, and that’s nice.”

Jan Kurfeld, from Germany, won the opening race in his group before being pulled out of the second race while in the lead after picking up a second yellow flag for a Rule 42 infringement.

The second race of the second group turned into a Danish benefit with Jens Lauge taking the win from long time leader Henrik Kofoed Larsen.

Greg Wilcox, from New Zealand, is now up to eighth overall, said of the event, “It’s a lot of boats out there and a fair bit of carnage. The corners are pretty full and the are some very, very good sailors, so it’s hard work trying to keep up.”

“I had a bit of a tough day. The first race was good and I got a third. The second race I was pretty deep for most of it and managed to hook a shift up the last beat to about tenth and in the last one we were all fighting it out and I got a fourth.”

The third best performer of the day was Gower, who sneaked a second place off Wilcox in the first race and then stormed the final race to win by several minutes, gaining hugely on the second upwind to hold a comfortable lead.

Gower, “I had a good start and went out to the left with Greg and got some good shifts and rounded the top mark in a good spot and managed to extend on every beat. I got lucky on a few shifts. A good day’s sailing.”

“This is my second year in the OK after my first Worlds last year in Quiberon. It was a good learning curve and I ended up mid-fleet. I just got a new boat so I am at the right end of the fleet now which is good.”

“It’s a great competition here with 130 boats, a good quality fleet. If you put one foot wrong you are spat out the back door pretty quickly.”

On winning the race, “Very satisfying. It’s been a long time since I won a race like this, so feels great.”

“I haven’t sailed for about 10 years until last year so I’m just getting back into it. I love the OK. It’s a great boat, very nice class, all the guys are great, having a beer after sailing and I couldn’t ask for more really.”

Racing continues on Friday with three races scheduled as part of the 10 race series, which concludes on Saturday. After Friday’s races, the fleets will be split into gold and silver groups for the final two races on Saturday.